The outlet water of two or more water pumps merges into a common outlet pipe, which is called parallel operation of water pumps. In irrigation projects, usually multiple pumps draw water from the same water source and supply it to the same irrigation system. Parallel connection of pumps means that multiple pumps share one outlet pipe. Each pump has a separate check valve. After the pumps are operated in parallel, the flow under the same head is added

①The water supply can be increased, and the flow in the main water pipe is equal to the sum of the water output of each parallel pump;

③Water pump: When one of the pumps working in parallel is damaged, the other pumps can still continue to supply water. Therefore, pumping water in parallel improves the flexibility of pump station operation scheduling and the reliability of water supply, and it is the most common pump station. A mode of operation. 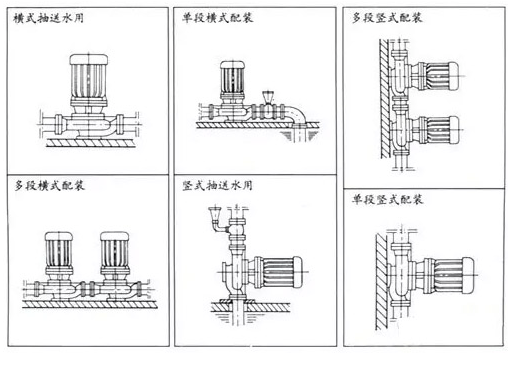 The parallel connection of pumps is suitable for the following situations:

① The flow rate of a single pump is too small to meet the needs of the irrigation system.

②When the water delivery distance is long or the terrain conditions are complex, and the amount of earth and rock excavated in the pipeline is large, in order to reduce the investment, the water delivery pipes of multiple pumps are combined into one.

③The group well network in the northern region connects the outlet pipes of multiple pumps to facilitate the deployment and rational use of water resources.

The heads of pumps running in parallel should be equal or not much different. It is best to use pumps of the same model, which is convenient for operation, management and maintenance. Multiple pumps of the same model are connected in parallel. If the distance from the inlet pipe of each pump to the water outlet confluence is short, the total flow after paralleling is equal to the sum of the flow of each pump, and the head remains unchanged.

2, the series connection of water pumps

The series connection of water pumps mainly solves the problem of insufficient head. After the series connection, the flow rate of the water pump is unchanged, and the head is the sum of the two pumps. In actual application, in order to avoid insufficient water intake from the downstream pump to the upstream pump, the flow rate of the downstream pump is usually adjusted to the best state to ensure sufficient water intake from the upstream pump. The schematic diagram is as follows: 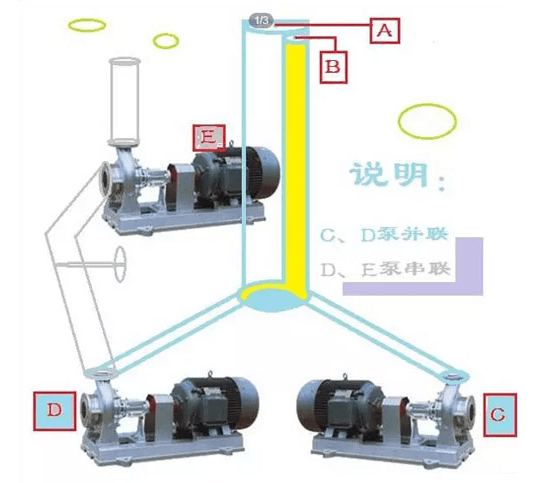 In the picture: the outlet of pump “D” and the inlet of pump “E” are connected in series by pipes. After the water pump is connected in series, the medium first enters the inlet of pump “D”, and the medium is pushed to the pump through the operation of pump “D”. The inlet of "E", through the operation of the pump "E", transports the medium to the place where it is needed. The series connection of water pumps is essentially an extension of stepped transportation. What is stepped transportation? It means that the water level downstream is too low, and the location to be introduced is too high, and it is impossible to "complete the mission" with a water pump.

For tandem operation, the outlet pressure of the n-1th pump (for long-distance series, the loss between pumps needs to be subtracted) is the inlet pressure of the nth pump. Therefore, the pressure bearing, bearing and shaft seal of the tandem pump have Must be required, otherwise it will cause shell fracture, shaft seal damage, bearing heating, etc. As in the case of parallel connection, if one or more pumps are turned off, the operating conditions of the remaining pumps will also change. 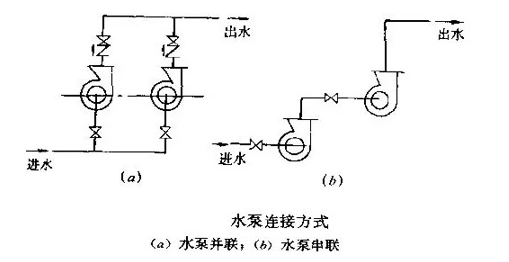 4. Under ideal conditions, the relationship between flow and head of two pumps of the same model and specification is:
When connecting in series: Q=Q1+Q2 H=H1+H2
It is known from the above two formulas that when two or more water pumps are connected in series, the flow rate does not change much and the head is superimposed.
When paralleling: Q=Q1=Q2 H=H1=H2
When two or more water pumps are connected in parallel, the head of the system does not change much, but the flow is superimposed.
The series connection of water pumps is often used to pressurize the water pipe network, and the pressure pump station of the outdoor water supply pipe network adopts the water pump series connection method. Parallel connection of pumps is often used when a single pump cannot meet the flow requirements, or when a single pump with excessive system flow will increase operating costs. Parallel connection can adjust the number of pumps to be turned on according to the amount of water consumption and peak water consumption, reducing operating costs. Circulating water pumps in heating systems are often connected in parallel to meet flow requirements, and standby water pumps are also connected in parallel.
Generally, in the initial design, the flow head needs to be determined according to the highest water consumption and the most unfavorable point, and then the most economical pump quantity is determined according to the flow head. At this time, the flow rate of a single pump is: Q single = Q total ÷ quantity.

But there is another situation opposite, that is, the performance of a single pump is used to determine the operating conditions in the fixed pipeline. This is different from the above situation. It is necessary to combine the specific pipeline characteristic curve and the parallel connection curve of the pump at this time on a single graph to determine the operating point of the parallel operation.

There is a big misunderstanding here, that is, the parallel operation flow is less than the sum of the two pumps. This misunderstanding is the second situation. For the flow head designed in the first case, the operating condition of a single pump is the flow divided by the quantity.

When communicating with customers, the customer always hopes that the flow rate of the single pump in parallel operation is slightly larger than the system flow rate divided by the number of units. This mainly depends on the design method. If it is the first system design, the single pump will deviate from the operating point when the selected pump is finally operated, that is, the head is too high. If it is the second case, it is difficult to say whether it meets the requirements, because the curves of different manufacturers and different types of pumps have inconsistent performance, but it is certain that it is not economical to determine the pipeline according to the number of pumps.