If the downhole wear-resistant self-balancing centrifugal water pump is improperly operated or the liquid is vaporized in the low-pressure area during the start-up and working process, it will cause cavitation. Cavitation and gas-binding phenomena can cause serious damage to the downhole wear-resistant self-balancing centrifugal water pump. Therefore, today I will take you to learn more about the causes of the two phenomena and the corresponding preventive measures, so as to avoid the phenomenon of cavitation and gas-binding during work. Occurs, ensuring the normal and efficient operation of the centrifugal pump. 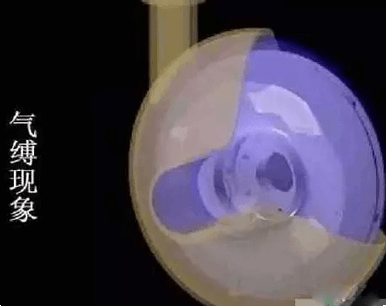 The pump cannot pump liquid, the unit produces violent vibration, and at the same time, it is accompanied by strong harsh noise. The motor is idling and it is easy to burn the motor. Affect the efficiency of conveying liquid and the normal operation of centrifugal pumps.

Before starting, fill the pump and fill the pump casing with the liquid to be delivered, and close the outlet valve when starting. In order to prevent the liquid poured into the pump casing from flowing into the low tank due to gravity, a check valve (bottom valve) is installed at the inlet of the pump suction pipe; if the pump position is lower than the liquid level in the tank, no filling is required when starting. Pump. Do a good job of sealing the shell, and the valve for filling water should not leak, and the sealing should be good. 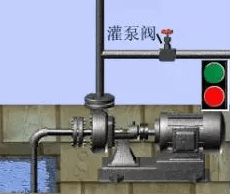 "Cavitation": Because the suction height of the pump is too high and the pressure in the pump is equal to or lower than the saturated vapor pressure at the temperature of the conveying liquid, the erosion phenomenon caused by the process of liquid vaporization, bubble formation, rupture, etc., is called " "Cavitation" phenomenon. When the "cavitation" occurs, the liquid produces noise and vibration due to impact, which reduces the flow rate, and even no liquid is discharged. In order to prevent "cavitation" phenomenon, the actual installation height of the pump should not be higher than the allowable suction height. 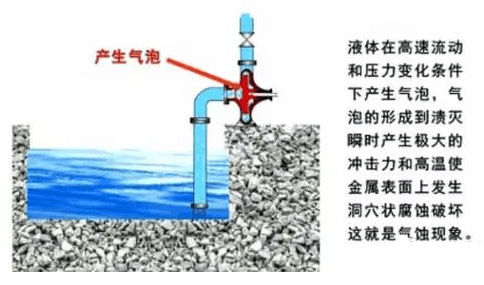 When the liquid sucked in the pump casing just vaporizes at the suction port of the pump due to the decrease in pressure, it brings a huge hydraulic shock to the inner wall of the pump casing, causing the casing wall to be corroded by "gas". This phenomenon is called cavitation. phenomenon.

2. The main causes of cavitation are:

2). The temperature of the conveying medium is too high;

3). The flow is too large, that is, the outlet valve is opened too much;

4). The installation height is too high, which will affect the pump's suction capacity;

Liquid with bubbles condenses or ruptures sharply after being squeezed into the high-pressure zone. Due to the disappearance of the bubble, a partial vacuum is generated, and the surrounding liquid flows to the center of the bubble at a very high speed, and a huge high-speed impact force of up to tens of thousands of kpa is instantly generated, causing an impact on the impeller and pump casing, causing the material to be corroded and damaged. damage.

3. The location where cavitation occurs

According to the different parts of water pump cavitation, cavitation can be divided into the following four categories: 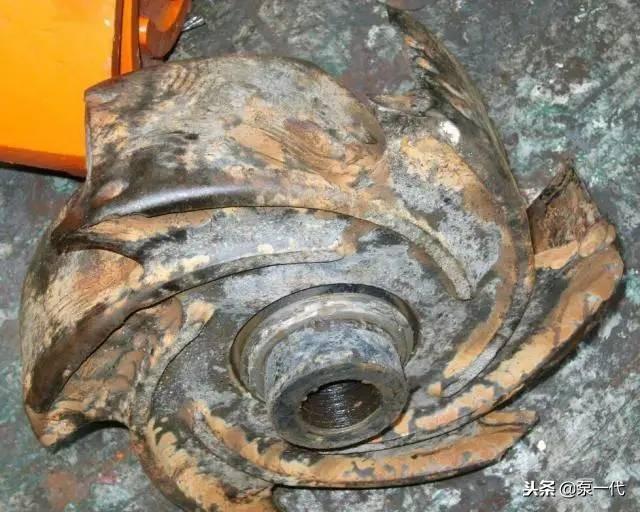 (3) Vortex cavitation: vortex cavitation may also produce a top-down ribbon vortex (referred to as vortex belt) under the impeller due to poor design of the water collection tank and inlet flow path or the pump working under undesigned conditions. When the center pressure of the vortex is lower than the vaporization pressure, the vortex becomes a cavitation zone.

(1) The performance of the water pump is deteriorated. When cavitation occurs, a large number of cavitations will be produced. When the water contains a large number of cavitations, the normal law of water flow will be destroyed, and the effective flow surface area of ​​the blade groove will be reduced, and the flow direction will change accordingly. The loss increases, which causes a rapid drop in the flow, head and efficiency of the pump, and even cut-off occurs when the cavitation is severe.

(2) If the flow parts are damaged, the wall surface of the water pump will be locally deformed and hardened and become brittle under the repeated action of the high-strength impact force, resulting in metal fatigue, causing the metal to crack and peel off. In addition to the mechanical action, it is also mixed with the chemical corrosion of the metal by the deep active gas (such as oxygen) that escapes from the water body and the electrochemical corrosion of the metal by the water body. Under the combined effect, the wall surface of the water pump appears pitted at first, and then becomes a honeycomb shape. In severe cases, the wall surface will be knocked out in a short period of time.

(3) Vibration and noise are generated. When the bubble collapses, the liquid particles collide with each other and also hit the metal surface, producing noises of various frequencies. In severe cases, a "crack" explosion can be heard in the pump, and the unit will vibrate at the same time. Under the repeated action of the huge impact, the impeller part has spots and cracks on the surface, and even gradually falls off in a spongy shape, which reduces the service life of the pump. Therefore, noise and vibration are also one of the main basis for judging whether cavitation occurs and disappears.

An effective measure to reduce cavitation is to prevent the generation of bubbles.

First of all, the surface that moves in the liquid should be streamlined to avoid eddy currents in local areas, because the pressure in the vortex area is low and bubbles are easy to generate. In addition, the gas content in the liquid and the disturbance in the liquid flow should be reduced, which will also limit the formation of bubbles.

At the same time, clean up the foreign matter in the inlet pipeline to make the inlet unblocked, or increase the size of the pipe diameter.

In addition, for pump manufacturers, it is necessary to improve the anti-cavitation ability of the centrifugal pump itself, such as improving the structural design from the suction port to the vicinity of the impeller; using a front inducer to increase the liquid flow pressure; increasing the blade inlet angle to reduce The bend at the inlet of the small blade to increase the inlet area.

Prev Classification and characteristics of water supply pumping station Analysis and treatment of common failures of XBD fire pump Next
Related Pump Knowledge
More Pump Knowledge
Centrifugal pump model meaning
31 Jul 2021
There are many types of centrifugal pumps, and the meaning of various types of centrifugal pumps is different, but there are certain rules. Most of th...
Read more
What is the specific operation process of the high-pressure grey water circulation pump?
30 Jul 2021
The specific operation process of the high-pressure grey water circulation pump: 1. Check and confirm the high-pressure gray water circulation pump b...
Read more
The function and structure diagram of the boiler drum feed water pump drum
29 Jul 2021
Overview of Boiler Feed Water Pump Drum The steam drum is the most important equipment for power station boilers. It is the connecting hub of the thr...
Read more
Dynamic illustration of the working principle of D-type horizontal multistage centrifugal pump
28 Jul 2021
The D-type horizontal multistage centrifugal pump has high efficiency and can meet the needs of high-lift and high-flow working conditions. It has bee...
Read more
Related Products
More