It is caused by the adjustment of the balance disc and the process error during the overhaul of the segmented multistage pump. At this time, friction between the rotating part and the stationary part occurred, which overloaded the motor and the fuse was blown. 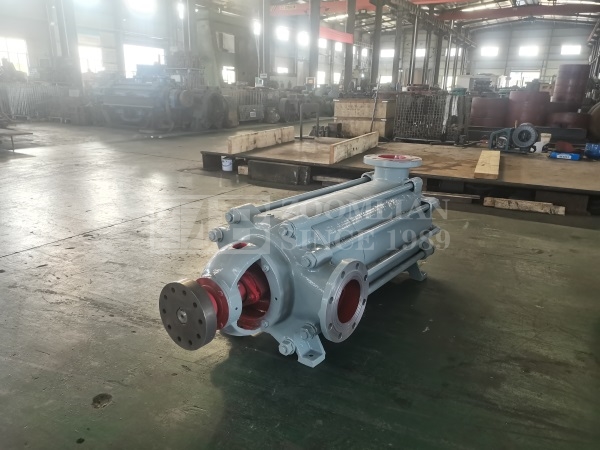 ↑Click on the pic above to learn 【Multistage Centrifugal Pump】products, prices, parameters etc.↑

When the repair process is wrong, although the position of the rotor is also correct, the balance plate has too large deviation (or balance ring deviation), which makes it lose its balance function. Because when the scoop is too large, the pressure cannot be built up in front of the balance plate, and the backward balance force cannot be generated; in this way, the large axial thrust (several tons to tens of tons) generated by the impeller will pull the entire rotor into the water. Side movement causes friction between the balance plate and the balance ring at the maximum point, causing the motor overload fuse to blow.

The first phenomenon is less common, and the second phenomenon is more common. For example, in the past, there was a water pump that was overloaded after overhaul and the fuse was blown. After disassembling the inspection, it was found that the balance pan was too large, with an opening of 0.60 mm, and the contact area turned blue from friction. Later, the opening was eliminated to 0.15 mm, and the current was normal after starting.

Of course there are other reasons. For example, for a segmented multi-stage pump, there is a ø3/4 inch valve on the balance pipe from the balance plate to the pump inlet pipe area. Although the door was in the open position at the time, the valve flap actually blocked the passage of the balance pipe. , Causing the pressure to increase after the balance tube, the balance plate wears out, and the motor overload fuse blows.

Prev Use and maintenance of ZYB air pump Design and analysis of fire-fighting water pump adapter Next
Related Pump Knowledge
More Pump Knowledge
The current situation of water ring vacuum pump
22 Jan 2022
Because the water ring vacuum pump and water ring compressor have the characteristics of simple structure and convenient use and maintenance, they hav...
Read more
Jet pumps are used in important applications for generating vacuum
21 Jan 2022
The jet pump is a device that uses the negative pressure formed by the high-energy fluid to pass through the nozzle to generate a high speed to absorb...
Read more
Selection of Pump Combination Scheme and Its Optimization Procedure
20 Jan 2022
The pumping station is a structure that ensures the water pressure in the water supply system, and is used to raise the required water volume to the r...
Read more
The characteristics of the development of magnetic pump
19 Jan 2022
1. Permanent magnet transmission, that is, permanent magnet coupling, is the safest solution for the machinery that needs to be sealed, and for harmfu...
Read more
Related Products
More