Water pump soft sealing packing, commonly known as soft packing, is a kind of new sealing packing made of non-asbestos polymer material. A very thin liquid film is generated between the cylindrical slider and the relative moving surface of the shaft. Due to the special material of the soft filler, the frictional heat generated is close to zero. Therefore, it is one of the fillers with the smallest frictional resistance in the world, and the action of the polymer barrier agent between the fillers ensures no leakage between the media. Therefore, this kind of filler is the only one that is plastic, low-friction and does not require cooling water to flush the water pump filler. 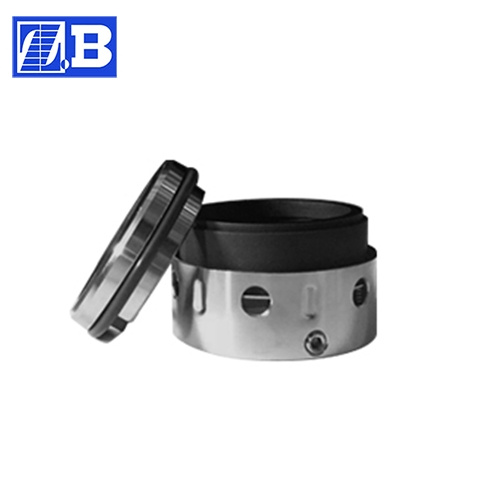 The mechanical seal for water pump is a shaft seal device that relies on a pair or several pairs of end faces that are perpendicular to the shaft for relative sliding under the action of fluid pressure and the elastic force (or magnetic force) of the compensation mechanism, and is matched with an auxiliary seal to prevent leakage. The common mechanical seal structure is composed of static ring (static ring) 1, rotating ring (moving ring) 2, elastic element 3, spring seat 4, set screw 5, rotating ring auxiliary sealing ring 6 and stationary ring auxiliary sealing ring 8 and other components , the anti-rotation pin 7 is fixed on the gland 9 to prevent the stationary ring from rotating. Rotating rings and stationary rings are often also referred to as compensating rings or non-compensating rings depending on whether they have axial compensating capabilities.

Prev Basic Methods of Vibration Transformation of Vertical Centrifugal Pumps Performance characteristics of leak-free annular diaphragm pumps Next
Related Pump Knowledge
More Pump Knowledge
How does a high pressure pump work?
20 May 2022
The following are some brief descriptions about the high-pressure washer pump. The pump is the heart of the operation of the high-pressure washer, so ...
Read more
What problems are prone to occur when the gear oil pump is idle for a long time?
17 May 2022
The gear oil pump and the arc gear pump have been idle for a long time without running. When they are restarted, the gear pump seal will leak, the gea...
Read more
How to maintain the clean water centrifugal pump?
13 May 2022
The clean water centrifugal pump is a rear opening type, and it is not necessary to disassemble the suction and discharge pipelines when disassembling...
Read more
How to Improve the Energy Saving of Centrifugal Oil Pump in Iron and Steel Industry
10 May 2022
The centrifugal oil pump has played a huge role in the iron and steel industry, so we have taken some measures to improve the efficiency of the centri...
Read more
Related Products
More