Axial plunger pumps are generally composed of main parts such as cylinder block, oil distribution plate, plunger and swash plate. There are multiple plungers in the cylinder, and the plungers are arranged axially, that is, the centerline of the plungers is parallel to the axis of the drive shaft, so it is called an axial plunger pump. But it is different from the reciprocating plunger pump, because its plunger not only reciprocates in the pump cylinder, but also the plunger and the pump cylinder rotate relative to the swash plate. The plunger contacts the swash plate with a spherical end. There are high and low pressure moon-shaped grooves on the oil distribution plate, which are separated from each other by a partition wall to ensure a certain degree of sealing. They are respectively connected with the oil inlet and the oil outlet of the pump. There is an inclination angle between the axis of the swash plate and the axis of the cylinder. 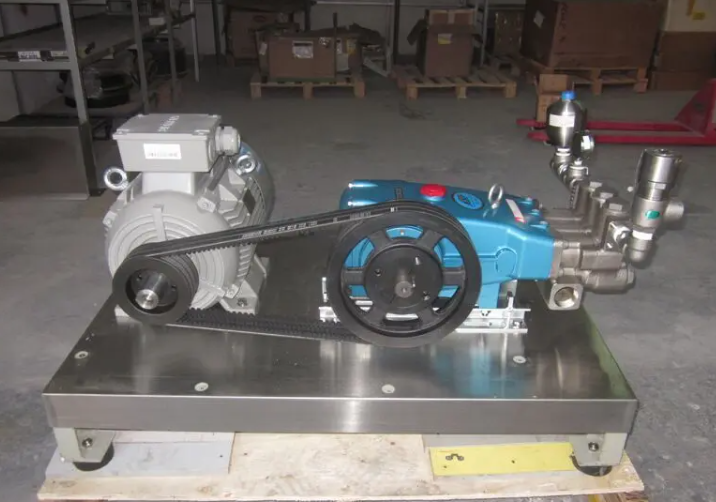 The working principle of the axial plunger pump is when the motor drives the drive shaft to rotate, the pump cylinder and the plunger rotate together, and the plunger head always keeps in contact with the swash plate, because the swash plate and the cylinder block are at an angle. , So when the cylinder rotates, the plunger reciprocates in the pump cylinder. Take the next plunger in Figure l-40 as an example. It turns from 0° to 180°, that is, to the position of the upper plunger. The volume of the plunger cylinder gradually increases, so the liquid is sucked through the suction port a of the oil distribution plate. When the plunger turns from 180° to 360°, the volume of the plunger cylinder gradually decreases, so the liquid in the cylinder is discharged through the outlet of the oil distribution plate. As long as the drive shaft continues to rotate, the pump will continue to work.

Axial plunger pumps are generally used in hydraulic transmission systems of machine tools, metallurgy, forging, mining and hoisting machinery, and are especially widely used in high-power hydraulic transmission systems. In order to improve efficiency, gear pumps or sliding vane pumps are usually used as auxiliary oil pumps in applications to supply oil, make up for leakage and maintain a certain pressure in the oil circuit.

Prev Advantages and disadvantages of jet pump Classification and various characteristics of DC pumps Next
Related Pump Knowledge
More Pump Knowledge
The current situation of water ring vacuum pump
22 Jan 2022
Because the water ring vacuum pump and water ring compressor have the characteristics of simple structure and convenient use and maintenance, they hav...
Read more
Jet pumps are used in important applications for generating vacuum
21 Jan 2022
The jet pump is a device that uses the negative pressure formed by the high-energy fluid to pass through the nozzle to generate a high speed to absorb...
Read more
Selection of Pump Combination Scheme and Its Optimization Procedure
20 Jan 2022
The pumping station is a structure that ensures the water pressure in the water supply system, and is used to raise the required water volume to the r...
Read more
The characteristics of the development of magnetic pump
19 Jan 2022
1. Permanent magnet transmission, that is, permanent magnet coupling, is the safest solution for the machinery that needs to be sealed, and for harmfu...
Read more
Related Products
More